Nobody over heated or got stung (in the flesh!) during the making of these videos!

In August Steve Bright at BBwear was invited by Robert Moon at Applicateur3D pest control services in France to field-test the BBwear ventilated ultra bee suit with hornets and learn more about Asian hornets and the current situation. They recorded some video footage and interviewed Robert; you can watch the full interview here:

“I was looking for a bee suit that will keep you cooler and better protected as well,” explained Robert. Robert and his wife, Lesley, set up Applicateur3D pest control services in 2010. After moving from South West London to France, so they could live a slower pace of life, Robert learned from a friend back in the UK how to take care of his problems with hornets and wasps that occupied his home. Robert decided to get French qualifications in pest control and he became the first British pest controller in France. He regularly works in temperatures over 30°C, so the BBwear ultra bee suit is very desirable as it is made from a high-tech, fully ventilated, 5mm thick, 3D fabric and oﬀers improved comfort, flexibility and protection compared with other suits. So how comfortable and cool is the ventilated ultra bee suit and could hornets sting people through it? Robert took Steve out on his pest control jobs for ten days and they tested the following products: BBwear Ventilated Ultra Bee Suit, Cow/ Buﬀalo Hide Beekeeper’s Gloves and Spats/ gaiters.

The next video footage is of Rob showing us this nest, which was hanging down in front of a holiday home front door.

“Having tested it with you, I think it’s fantastic. When the wind blows and you’re on a roof or working in the field the wind blows straight through the suit and it keeps you cool, it’s an amazing piece of kit, I really like it.” said Robert. They were dealing with Asian and European hornets and also wasps; lots of people still do not know the diﬀerence between these. In temperatures of 30–36°C they attended ten to fifteen call-outs each day, from nests in trees and sheds to four windmill sites where they destroyed 87 wasp nests. They were not stung at all, even when the hornets were aggravated so as to get a reaction from them; yes, we really wanted to test the ventilated suit properly!

The next video footage is of Rob and Steve looking ultra cool and confident at the first hornet nest to be destroyed on our trip.

In this video we see a beach ball-sized Asian hornet nest which was terminated and brought back at our shop for all to see.

Robert’s conclusion was: “..for a pest controller I think it’s brilliant, it works really well ... I’ve been deliberately antagonising the hornets to try and get a reaction from them and we’ve not been stung at all, so I’ve got more confidence wearing this suit than I did with the deluxe version in the BBwear range. Having said that, the BBwear deluxe bee suit is still a very good suit and it’s served me well in a pest control environment over the last ten years ... I do ten to fifteen jobs each day, I don’t have to keep taking it oﬀ, I can drive with it as it’s perfectly comfortable to drive in..”

Steve and Robert have plans to run an event to educate people on the diﬀerences between bees, wasps and Asian/ European hornets. Steve has brought some dead nests back to the UK to put on display in the BBwear shop in Truro, so pop in and say hello if you are passing and want to have a look at these ‘up close’.

Anyone who suspects they have found an Asian Hornet or nest, should send a photo to alertnonnative@ceh.ac.uk

Follow BBwear and Applicateur3D pest control services on Facebook for updates on this and other interesting news.

Robert Moon, on the BBC One Show about Asian hornets, October 2015

Win one of our award-winning Ultra Bee Suits! 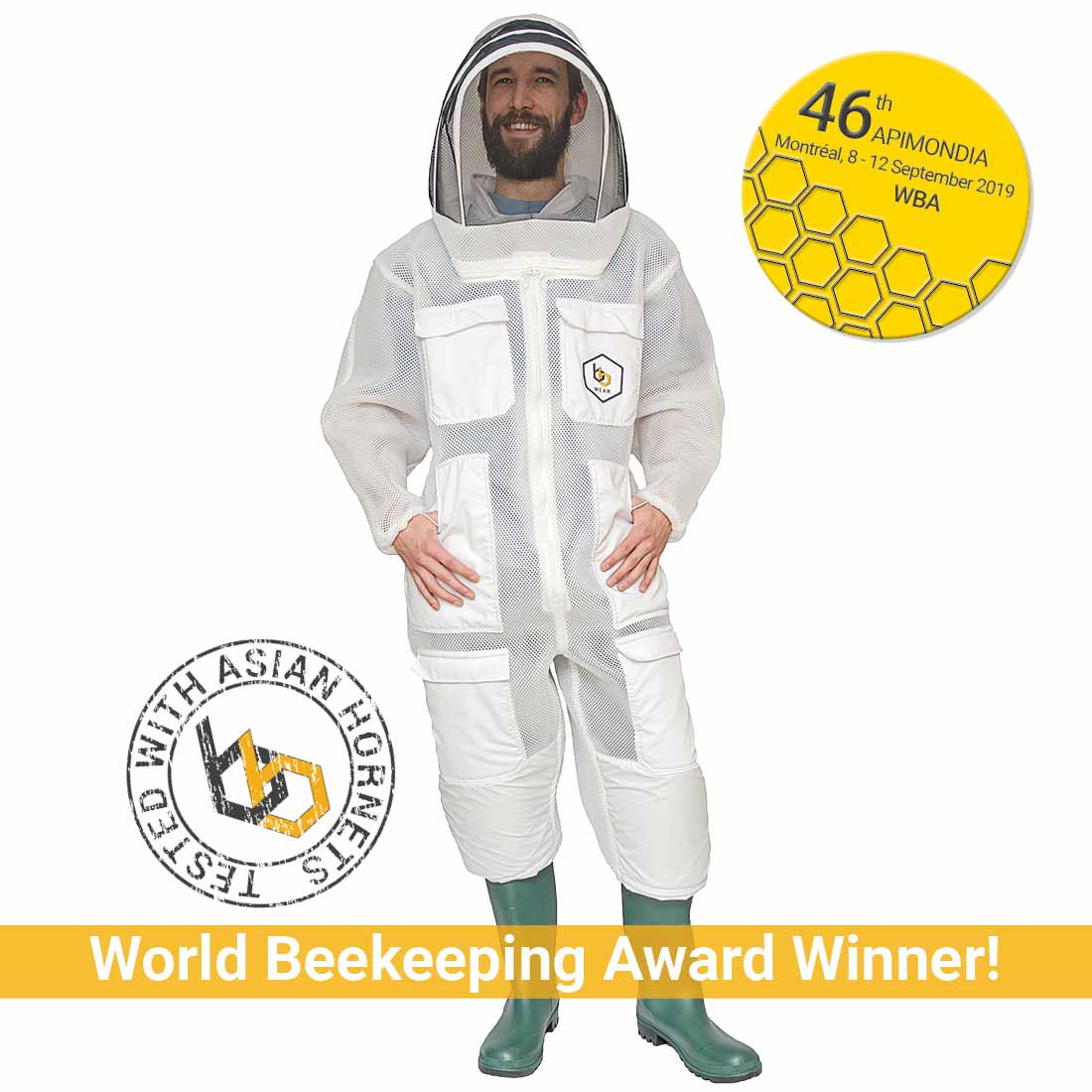